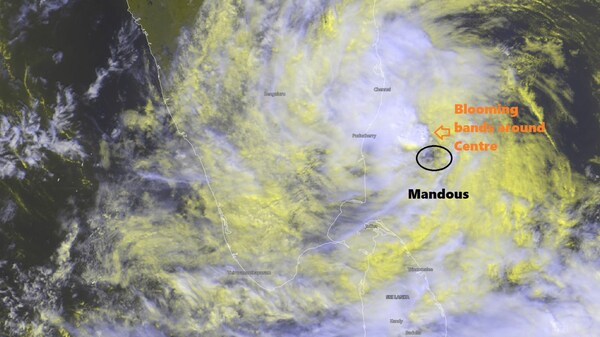 1. Where is the cyclone  Mandous now and what intensity it is in ?

We can see here that the Cyclone is still over 150 kms away SE of Chennai and is moving in W-NW direction towards North TN coast. The intensity of the Cyclone is around 50 knots and pressure is 998 mb with wind speeds of 90 km/hr. 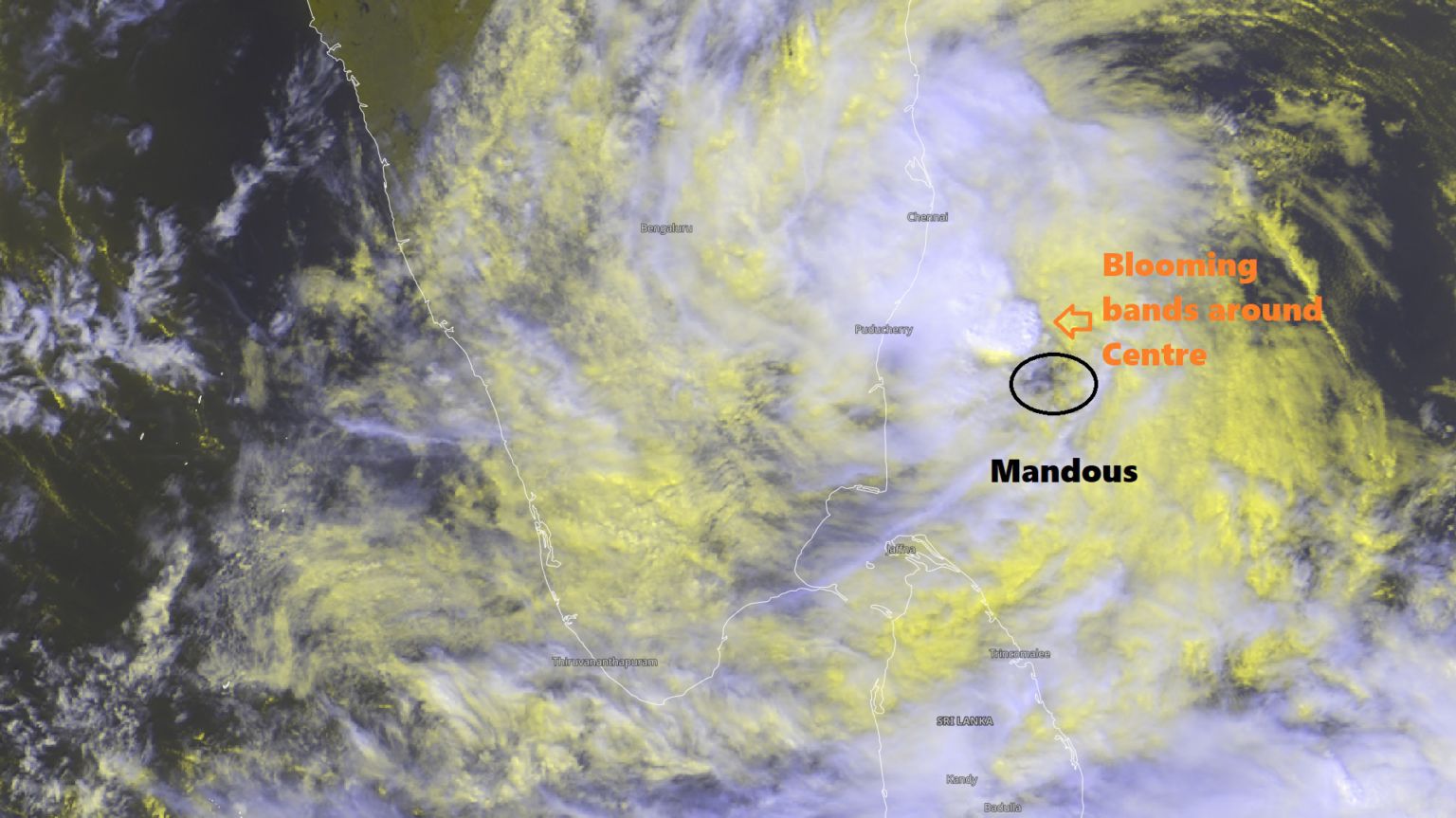 2. What is the health of the Cyclone Mandous ?

The Sea Surface Temperature (SST) is around 28 C and expected to remain around 28-27 C. While Wind shear which was the reason for the cyclone to weaken from Severe Cyclone to Cyclone is seen reducing from 30-25 knots to 15-20 knots.

4. Why Cyclone Mandous is moving towards Mahabalipuram and not Delta ?

Many people were asking, that cyclone is close to Delta and how it will change track towards South of Chennai. How close does not matter, the ridge position matters, how we travel in our car or bike in the road, the road for the cyclone is the edge of the ridges. Thats why the W-NW movement towards Mahabalipuram and not towards Delta. In other words cyclones are pallam (low) and High pressure are medu when ur inside a pallam, u can traverse only around the ridges of the medu (high pressure).

So the conclusion is that Cyclone Mandous is expected to cross south of Chennai near Mahabs with some + or – some kms on the night of 9th December, 2022 to early morning hours of 10th December.

5. Why only there is cloud on the west side of Cyclone Mandous ?

The east side of the clouds is eroded and exposed due to the wind shear but in the west side where there is convergence buildup, the clouds are gaining back strength. Thats why one side there is clouds and other side there is no clouds.

6. What will be sustained wind speeds and gusts

We follow 3 min average for sustained winds and gusts (small burst of winds at times).

For Gusts, add another 10-15 kms to the sustained winds

7. What will be Rainfall and what are the districts ?

Very heavy rainfall is expected to happen around Chengalpet, Chennai, Tiruvallur and Kancheepuram district tonight. Tiruvannamalai and parts of Villupuram too has chance of heavy rains.

The interiors (Ranipet, Vellore, Tiruvannamalai, Tirupattur, Krishnagiri, Chittor and Bangalore) will get rains tomorrow, while the coastal areas will get on 9 night-10th December morning. We will never know which spot among these districts where a big event might occur, which is always associated with Cyclones.

The rains will be intermittent to start with once we are close to the centre, we might see non stop rains for few hours when the centre passes the areas in above districts. Chennai was lucky to get rains a day early compared to other districts.

Once Mandous moves into Arabia sea, the West TN belt like Erode, Kovai and Nilgiris will get pull effect rains. Chennai too might some rains from the pull clouds from other side.

The areas north of crossing will have the waves very rough. So right from Mahabs to Pulicat Coast dont venture out into seas or even go near the sea shore while crossing. The storm surges might come well into the beaches, so no sight seeing when the cyclone crosses.

10. Official wind speeds and Gusts in Chennai from cyclones in last 50 years

11. Strongest cyclones in terms of pressure to cross Tamil Nadu / SL in last 40 years during NEM

(Min 975 mb pressure at any point of life time)

13. Do and Dont’s during Cyclones for Public.

After Mandous next low is expected to form in Bay of Bengal in another 4-5 days but where it will go is not clear.